Why Does the Change Engine Oil Light Come On?

Have You Ever Wondered Why Does the Change Engine Oil Light Come On?

As vehicle owners… we’ve all heard the saying “Regular oil changes preserve your engine’s life”. There is truth to this saying. Oil tends to lose its protective properties as it gets towards the end of its lifespan. Also true that motor oil gets contaminated with dirt and/or metal particulates. Such contamination creates the recipe for disaster for internal components if it’s not changed in time.

But how often do you have to change it? Some say 10,000 miles, others say 3,000 miles. Because there are some variables to take into account, it’s hard to calculate an exact number. Therefore the 3,000 mile interval has been preferred for many years as a general rule. Here we have a more in-depth article regarding this topic.

Since every situation is different with driving style, operating temperatures, operating environment and vehicle loads in general… in real life, the 3,000 mile rule would mean for many engines that the oil change is done too early. This leads to a waste of resources or money that could have been better spent elsewhere.

Luckily more and more cars and trucks are getting equipped with a device that swaps out the old, hard to track rule, with a simple dashboard light or message that reminds you when to change the oil. But what triggers this and why does the change engine oil light come on in the first place?

If you are thinking about the old technology where your car just reads the odometer and adjusts according to that. Then you may be pleasantly surprised to find out that there is much more going on here to determine the frequency of when the change engine oil light indicator does come on. The system is called an oil life indicator and comes in two basic varieties: (1) based on algorithm or (2) based on direct measurement.

Why Does the Change Engine Oil Light Come On for the ‘Algorithm’ Based Oil Life Indicator?

This system does not require your car to have multiple sensors, what it does do, is take into consideration multiple factors such as the number of miles driven, temperature variations during the drive, engine performance and load, etc.

These factors count because oil degrades differently in the city vs. the highway. Or in warm/hot climates vs. cold climates. Driving styles influence degrading of engine oils… as a sporty, more aggressive driver puts more pressure on the oil and engine overall.

The monitoring unit will receive all this valauble data from the PCM (Powertrain Control Module). It then runs it through a specially created formula or algorithm to determine the remaining life of the engine oil.

Each time you start your engine, there will be a message on the vehicle information center on the dash. Message will inform the user know if their oil is OK, almost due (remaining life) or needs changed right away. As a norm, users go through this gradually as the system is set up to have a buffer even for those of us who tend to procrastinate. 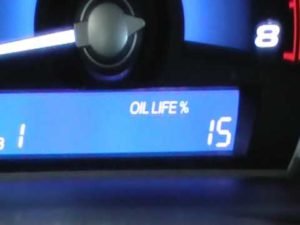 Why Does the Change Engine Oil Light Come On for the ‘Direct Measurement’ Oil Life Indicator?

As the name implies, this system uses a number of sensors that sample the oil and determine the remaining life based on factors, such as:

Sounds like these cars have a tiny laboratory inside them. It’s not exactly the case, however the system does get really close to the readings that a laboratory can do.

Each manufacturer uses a different combination of measurements to ensure that predicting remaining oil life is accurate. In most cases the driver will have a a message or a light come up on their instrument cluster. Anything from green/yellow/red code color styles, to a percentage message like “30% Oil Life Remaining”.

A study done by General Motors estimated that drivers who use any of the two systems above have in average, 2-3 times fewer oil changes each year. Changing oil when the system recommends vs. the 3,000 miles rule could result in reducing pollution with as much as 100 million gallons per year.

Some companies went ahead and tested these monitoring systems in real life. Their tests exposed that for example, a Honda Fit Sport driven around 90% in town conditions… requested an oil change at 5,500 miles vs. the same car driven around mostly on highways at 7,600 miles.

Another test on a Pontiac G8 GT managed to go 13,000 miles before the system indicated that there is a need to change the oil. They took samples from all of the vehicles above and submitted to a laboratory. Interestingly, all of the results concluded the same thing “The oil still had at least 2,000 miles of life left in it”. 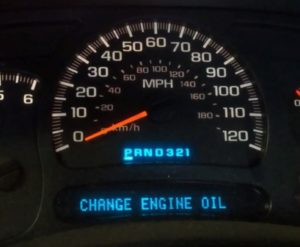 This indicates that the ‘safety buffer’ is a real thing for people who continue to drive even when the change engine oil light has come on for some time. This shows that the Oil Life Indicator systems have a conservative nature and at the same time, a pretty accurate indicator of ensuring that you will get the most out of your oil change without doing any harm to your ride.

Does your car have either of these two systems? Should you look for this option on your next car purchase, either new or used? Can the system generally be trusted? In short, this system is fairly accurate and can make your life a little easier while taking the focus off the odometer & oil change schedules and move it on the driving experience, which is cool.

Regardless of the system you’re using, being it the old oil change schedule or this new oil life indicator system, one extra precaution you can apply to your engine is a quality engine oil additive. Oil additives provide an extra layer of protection and benefits, prolonging your oil’s life. One such additive is CleanBoost® EMT™ 16 oz. This supplemental lubrication technology extends the life of your oil and adds a layer of micro-protection to your engine, transmission and gearbox components, greatly reducing wear. Anywhere… where friction creates heat and stress on components, this formula will penetrate and ensure that the components are protected from harmful or accelerated wear.

What Are Fuel Pills?

There are multiple ways of taking care of your car and it's fuel consumption. Today we will be talking about Fuel Pills. A product that is growing in popularity due to it's ease of use and benefits along with ever increasing fuel prices. Not using a quality fuel additive (or in this case, a fuel pill) to boost MPG or efficiency is literally giving away ...