“Can a tire affect your fuel economy? By how much? Are there pros and cons to changing the tires? – Read on to learn how tires affect fuel economy for truckers.“

If you’re serious about trucking (or you just don’t want to end up making a call for tire service on the side of the road) these—and many more—are all questions you should be asking yourself and researching out.

Obviously, tires go round and round… but do they really? They rotate around and around, but if you’re familiar with the term “rolling resistance” then you understand the concept that actually your tires are not completely round all the time. In fact, what happens is that as the tire rolls to be in contact with the road and under the weight of the vehicle, it’s shape changes very differently than what it previously was. Then once it comes out from contact with the road it springs back to it’s original state. Tires are constantly experiencing these recurring cycles of deformation and recovery. This state of rolling resistance is an example of how tires affect fuel economy for truckers.

Because the tires undergo this change, it actually causes friction with the road surface, creating mechanical energy that is released in the form of heat and dissipated from the tires. Which is too bad, because that heated mechanical energy could have been used to propel you forward instead of becoming wasted heat. Well, some tires can do this better than others. But there’s a price. And we don’t mean just the price tag, but trade-offs.

Tires affect fuel economy for truckers as one element, but there’s more. Tires affect the more obvious elements also like traction, handling, ride comfort and appearance. You could probably get a really hard compound tire that wouldn’t create much friction with the road and wouldn’t undergo rolling resistance as much as a normal, softer tire, but that loss in friction also means a loss in traction, which is definitely needed. It would probably also mean very poor handling and a rougher ride. And even those these tires affect fuel economy for truckers, it would not be worth the safety trade off. 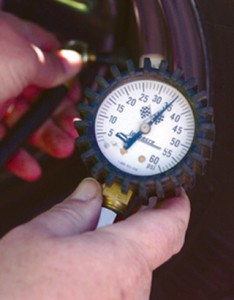 The main item to consider when getting the most fuel economy out of your tires is PSI, or air pressure. You always want to maintain your truck in all aspects, especially the tires. A lower PSI would mean better traction, but more friction, less fuel economy and uneven tire wear. A higher PSI would mean lower traction, but less friction, better fuel economy and again uneven tire wear. You always want to keep the PSI right where the recommendations are because the damage that’s done if you don’t will definitely make up for any money gained in your MPG.

Keep those tires maintained, inspected with each fill up; keep that fuel economy as high as possible while always placing safety first. Or you can also use a quality fuel additive to improve the combustion processes within the engine itself to improve fuel economy.

What Exhaust Regeneration Can Do for You

"Do you wish to improve your fuel economy? Do you know that you can do this by using a filter? Read on to find out more about it..." Long haul trucking involves transporting loads across long distances. This requires truckers to stay on schedule and use their fuel efficiently. One way this can be achieved is through Exhaust Regeneration. It can ...