How to Decide Between Gas and Diesel Trucks

If you're looking to decide between gas and diesel trucks, you have several variables to consider. You'll have to pick from different brands, sizes, years and features, so there's a lot to mull over. Plus, all of the commercials all tell you they all have the biggest, best, boldest, and newest. How do you pick which one to choose?

One of the most important decisions you'll have to make is choosing between gas and diesel.

Some people swear by diesel trucks while others prefer gasoline. It may seem like a matter of opinion, but there are a lot of facts involved. Diesel and gasoline engines are fundamentally different, each offering specific and measurable advantages.

Apart from the way they work, there are several differences between gas and diesel trucks. Here's a list of things to consider when making your choice.

The first thing you'll notice when comparing gasoline trucks against their diesel variants is the price difference. Diesel vehicles cost more than gas ones, and not by a little bit, either. On average, a diesel truck will cost you between $5,000 and $8,000 more than the same model powered by gas. That’s nothing to sneeze at.

Part of this price difference is due to the extra parts needed to make a diesel engine. In recent years, the price gap has increased because of the new technology required by the EPA to make diesel engines more eco-friendly.

If you end up deciding to go with diesel, be prepared to pay more upfront.

Another factor to consider is maintenance. Diesel and gas engines differ both in the price of maintenance and how often they'll need servicing. Many of the same things that make diesel engines more initially expensive also make them costlier to repair.

Diesel trucks have specialized parts that gas alternatives don't, making them harder — or at least more expensive — to replace. Some diesel models also might have problems like fuel tank lamination issues that will need attention. However, generally speaking, diesel engines will need repairs less often.

A gas engine might need maintenance more often, but it will cost less to do so when the time comes.
As an added protection you could also run CleanBoost® Fuel Pills™ in your gasoline. This is a cost-effective way to extend engine life by reducing fouling and corrosion by improving the heat transfer and also eliminating carbon deposits. This translates into more power, more MPG and less spend on maintenance.

Fuel efficiency is the most debated topic when one wants to decide between gas and diesel.
One of the main benefits of a diesel engine is its fuel efficiency. Diesel-powered vehicles are 20 to 35% more efficient than gasoline models, which is a considerable margin. You should note, however, that this discrepancy mostly applies to cars, not trucks.

Diesel trucks still get better mileage than their gas counterparts, but not by so wide a margin. . Modern gasoline engines are also more efficient than their older versions, so the gap is narrowing as time and technology move on. Small differences do add up over time, though, so the refueling savings of a diesel truck may prove to be substantial after enough use. If you’re going to be putting a ton of miles on, this could impact your choice.

There is also a way to increase fuel savings on a diesel truck without putting a ton of miles on it. One such way is by using CleanBoost® Maxx™ Fuel Additive. This additive increases MPG, reduces emissions and also provides extra torque. The extra benefits outweigh the additive cost and would surely lean the fuel efficiency scale more towards diesel engines.

Efficiency isn't the only influencing factor in fuel economy. While prices have fluctuated over the years, diesel fuel currently costs more than gasoline, mainly due to modern environmental requirements. The higher cost of diesel may cancel out the advantage offered by better mileage, depending on local prices and how much you drive. That’s something you’ll need to research for your area.

Gasoline is also more widely available than diesel. Not every gas station offers diesel fuel, so in some areas, you could end up driving around more while looking for a place to fill up. If you plan to drive locally, just make sure you know which stations have what, or make sure you have a go-to station that you can fill up at before a big trip.

The biggest advantage of diesel might be its power. Diesel engines offer considerably more torque, which is the rotational force needed to turn wheels with heavy objects in tow. Some diesel trucks put out almost double the torque of their gas variants.

If you're looking for a truck that can haul or tow heavy loads with greater ease, you'll probably want to consider a diesel truck. There’s nothing like that full, raw power to help you get the job done. 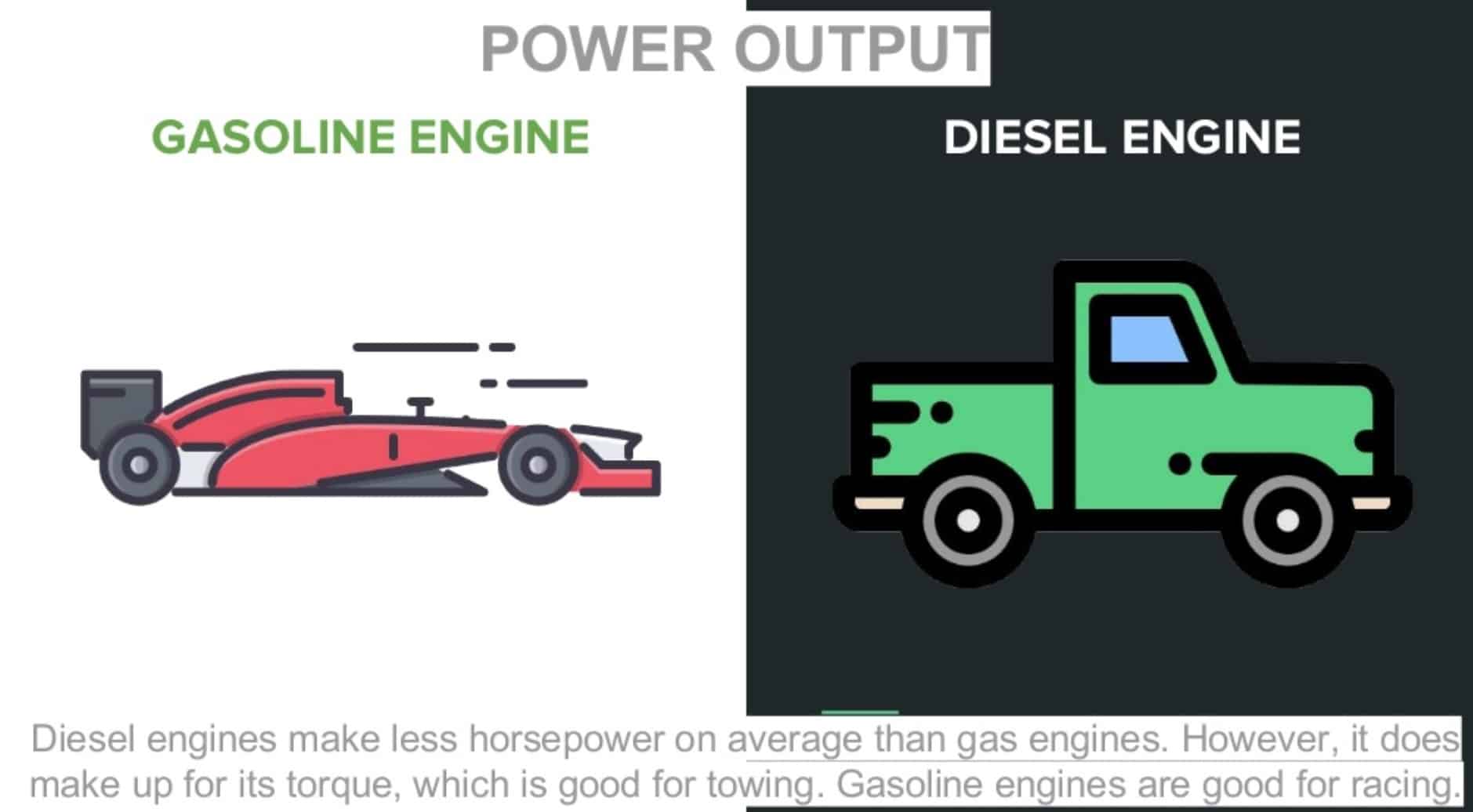 As much as you may love your brand-new truck, there may come a day when you need or want to sell it. It may be beneficial for you to consider the resale value of any vehicle you buy. If you're looking for high resale value, look no further than diesel.

Diesel trucks tend to last much longer, so they often resell for higher prices. This advantage is multiplied by the fact that their towing capacity makes them more desirable for industrial uses. Because of this demand, companies looking to buy used vehicles might prefer a diesel one.

Of course, if you don’t plan on reselling, this isn’t a factor. Keep in mind that plans change, and you may want to sell later down the road even if you don’t think you will right away.

How can you decide between gas and diesel? Ultimately, it depends on what you want to do with your truck. There's no one clear winner here because each kind of engine is better suited to different tasks.

If you want a workhorse, you probably want a diesel. It may be more expensive initially, but it'll make up for it with superior towing ability and a longer lifespan. If you frequently travel over long distances, you'll also appreciate the improved fuel efficiency of a diesel truck.

If you're looking for a day-to-day vehicle to take you to work and back, gas might be the better option. A gasoline-powered truck is cheaper and easier to maintain, and it will cost you less to fill up.

Scott Huntington is an automotive blogger who covers everything from the Model T to the Model 3. Find his work on Off The Throttle or check him out on Twitter, @SMHuntington

What is the best Penetrating Oil?

Nothing annoys car owners and auto mechanics more than rusted nuts and bolts that won't move. Any slight effort to force them out might damage the bolts, tool or machine part. You might be tempted to reach for any lubricant oil available. No, don't do that! Using general lubricants with high viscosity would make matters worse. Such lubricating oils ...