Every vehicle dissipates heat energy after expending fuel. However, the environmental heat could increase the negative impact of heat on your engine, air conditioner, tires and other car or truck parts.

This guide will give you insight into the necessary maintenance routines you need to observe before taking your ride out, the parts that are most susceptible to heat, and the disadvantages of heat on your gas or diesel powered vehicle.

How does heat affect car and truck performance?

As far as how heat affects car and truck performance, is mostly evaluated by aggregating the total performance of every one of its components including the engine, air conditioner, and tires.

In this section, we are going to take a deep dive into how heat affects car parts in particular.

One of the common effects on how heat affects car and truck performance is on liquids and the decrease in viscosity.

The same happens to engine oil during summer months. The heat reduces its viscosity, making the once-thick engine oil, thinner.

The residual energy from your car’s combustion and the environmental heat emission acts on engine oil thereby causing an increase in temperature and a reduction in viscosity. This reduction results in the proper lubrication of engine oil alongside a hike in friction and even more heat, which is a common cause for engine breakdowns in the summer.

The best bet is to change engine oil prior to summertime. Ensure you substitute the less-viscous oil with a more viscous alternative. Be sure to fill it to the 'MAX' level on your dipstick while your vehicle is level to enjoy constant protection throughout the summer. Get more insights to oil here.

This expansive impact of how heat affects car, truck and even RV trailer performance is not only restricted to liquids as seen in engine oil.

Tires also welcome heat expansion during summer the weather. When tires heat and expand, they give room for over-inflation, thereby increasing the pressure in the tire. If the driver is not constantly monitoring tire pressure to ever changing loads (especially on trailers, RV's etc), the tire could bulge or blowout on the road and do more damage to the vehicle or even cause a loss of control. You need to be extra conscious of your tire pressure before embarking on any journey. Doing so saves time and money.

The third most affected car part during summer is the battery. The battery suffers during winter and summer. During the summer, extreme heat affects car and truck batteries  by halting the ionic reactions inside car batteries. The implication of a halt in ionic reaction, is that the battery can no longer create the cranking amps to start the car. This unbearable heat coupled with the load from the fans and air conditioning systems could disable the batteries temporarily or permanently.

The best way to avoid “battery issues” is to prepare for the summer by servicing your car beforehand. That way, you can have a rough idea of what to change and what to maintain. Your mechanic can help you and you can check the power output of your car battery yourself using a common voltmeter. If your car or car battery is old, it’s advisable to have breaks and checkups in between trips.

Overheating can happen due to slow driving, since the air given out via the fan to cool the radiator is not enough. To prevent overheating, ensure your coolant tank is full. Also, gauge the optimal protection limit of your antifreeze with a coolant tester to make sure your car does not overheat beyond that limit. You can search online for coolants with very high protection limits. Get more information and tips & tricks from this dedicated article.

Most new cars are fortified with modern air conditioners, which is good news for summertime travelers. Service your AC system regularly to avoid unnecessary AC shutdown. Even if the AC system is not shut down due to lack of maintenance, they would become clogged, making your cabin a source of unpleasant smell.

How does heat affect car or truck exhaust performance?

The car engine is like the human body while its exhaust pipe is similar to the lungs. Once the lungs start developing issues, the whole body starts malfunctioning, which means the person needs medical help. In the same vein, a bad exhaust says a lot about the car’s performance. In fact, one of the popular routines of car engineers is to start a car before analyzing it further. Starting a car provides two pieces of information – the state of the exhaust system and battery performance.

What is an exhaust system?

The exhaust system of a car or truck is designed to remove waste products of fuel combustion from the car via a system of pipes and manifolds. The system is made up of header pipe (aka exhaust manifold), exhaust valves, catalytic converter(s), and mufflers. The exhaust valve opens once the power stroke is approaching a halt and the piston gets closer to the TDC (top dead center). The exhaust valve does not close until there’s an overlap with the intake valve. When there’s an overlap with the intake valve, scavenging happens in the internal region. This overlap causes suction and helps remove the exhaust gases from the cylinder.

There are various ways to identify if something is wrong with your exhaust system, namely:

Weird noises from the exhaust pipe:

One of the foremost signs to look out for is the loudness of your car’s exhaust. A noisy car exhaust indicates that something is wrong with the exhaust system and possibly the engine.

Unable to start the car on time and acceleration difficulties

Exhaust problems could reduce the performance of a car or damage it. Later in this article, we are going to explain why you may need to call your mechanic once you realize that your exhaust system is faulty.

A reduction in the fuel efficiency

The fuel efficiency of a car or truck decreases with the reduction in car performance. Moreover, the inability to channel out the water condensate as a by product of combustion can affect the process itself.

A burning smell that is heat or leak related

A burning smell from a vehicle’s exhaust pipe indicates that a part of the exhaust system has some kind of blockage or there’s a fluid leak causing it. Gasket failure could create a exhaust leakage around the engine wiring and other components, thereby subjecting plastic parts to melting or burning. 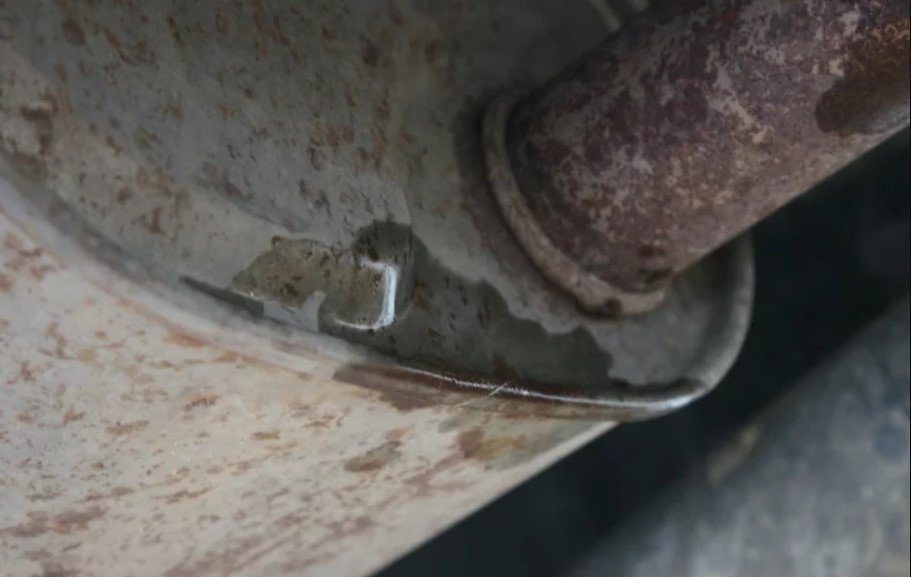 Two major factors that contributes to a faulty exhaust system

It is important to note that there are many factors that can affect an exhaust system, however these are the two most popular reasons:

As stated earlier, a professional mechanic can easily tell if an exhaust system is faulty from the sound it makes along with a visual inspection of system components.

Want to know how? This section consists of the mechanic’s most valued secrets.

The Hissing or Sizzling Sound

The hissing sound is described as a sharp sibilant sound similar to when the letter S is pronounced or when a snake hisses while the sizzling sound is often associated with the sound steam or hot vapor makes. For instance, the typical sound made when hot bacon is placed on a griddle.

What it means:
The best way to know if your car’s engine is overheating is to watch out for the hissing or sizzling sound. It can also mean that steam or vapor is escaping through a leak around the radiator, hoses, or any part of the car’s cooling system or tanks.

This is a sound a thing makes when it rotates or moves in a to and fro manner. It is often regarded as a low, consistent and continuously oscillating sound. For instance, the sound made by a fan clutch or fan when it is running. This sound can also sometimes be described as a vibration or buzzing sound.

What it means:
The whirring sound could be deep or less intense depending on the engine speed, so it is important to study and listen to your car or truck before making any conclusions. A whirring sound indicates that one of the belt-driven accessories of your car may be damaged. For instance, the alternator, drive belt, serpentine belt, idler pulley, radiator fan, power steering pump, fan clutch and many others.

The sputtering sound can be described as a mild explosive or spitting sound. In regards to a car engine, sputtering is defined as an incoherent sound that rises and falls.

What it means:
​The reason for the sputtering sound from your car engine is unfinished combustion. It is a result of ignition duration issues which can be linked to the spark plugs, battery, ignition coil, spark plug wires, or distributor.

Another cause is the decrease or halt in fuel distribution. A reduction in fuel flow is most likely a result of dirty or clogged fuel injectors or fuel filter. The best bet to ending the sputtering sound is to get your mechanic to check again, diagnose the source of the sound and fix it before it damages your vehicle's engine or leaves you stranded.

The tapping sound is best described as the consistent sound of a working clock, except much faster. It could also be termed clicking or knocking, but the sound ought to be consistent and a bit slower at idle.

What it means:
The tapping sound of a car engine indicates that a metallic object is hitting one of the internal components in a non designed way. The tapping sound may increase with an increase in the engine’s RPM. Unlike other sounds, the cause of the tapping sound is usually the primary source.

Some drivers notice that their car or truck does not start after exposure to a great deal of heat. Heat could deprive a car starting or even cranking over. A “no crank” situation is a situation where the car doesn’t respond when you turn the key while a “no start” situation means it's cranking over, but not starting. Eventually this condition results in a no crank situation where battery voltage and/or connections become too weakened to do the job.

Heat can stop your car or truck from starting though bad battery connections and is quite common. Heat is no friend of electricity, as it builds high resistance within the electrical circuit. The mechanic's report should include the condition of the spark, ignition and valve timing, fuel pressure and injector pulse. These four factors are necessary for a successful car ignition.

Sometimes, to detect the actual cause of a car misfire, you ought to be able to recreate the secondary problem, which in this case is heat or near over heating. If the problem is temporary or intermittent, the mechanic might face difficulties when trying to diagnose the car's fault(s) without this secondary cause being present.

We hope this article has been helpful to you. Feel free to leave a comment if you have found value in our research on how heat can affects car and truck performance.

Brake Cleaner – Discover Its Many Uses

Automotive brakes are undoubtedly one the most important parts of an automobile. If there’s any part that requires constant care, it is the brake system. Brakes get dirty often due to the constant exposure to grease, brake dust, road debris, grime and petroleum-derived brake fluid. A quick way to dissolve these pesky varmints was needed. This is why ...