The Dangers of Chlorinated Paraffin Additives

“You’ve most likely heard of engine additives that reduce engine wear. Most of which are useless in real world applications for long term use because of one main ingredient. Here are the dangers of chlorinated paraffin additives…“ 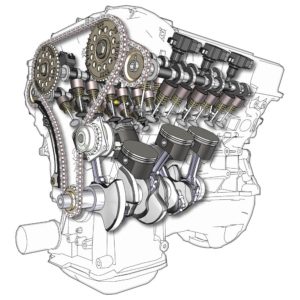 The Dangers of Chlorinated Paraffin Additives

Unless you’re Amish, you’ve no doubt heard somebody somewhere, extolling the benefits of some magic engine additive that reduces engine wear. However, most of them are about as effective as Dr. BillyBob’s Miracle Snake Oil. Now that’s not to say that all additives are hogwash, because some of them do work. But what makes them work can sometimes do more harm to your engine than good. Case in point: Chlorinated Paraffins.

It’s All About Ridges and Valleys

When an internal combustion engine is running, large chunks of metal are spinning around at  a very high rate of speed. This movement naturally creates heat, which the motor oil removes as it passes by the parts. As the engine ages, microscopic “ridges and valleys” form on the metal surface. These deformations get worse over time, and are commonly referred to as ‘engine wear’.

As the metal bits slide against each other, these “ridges and valleys” cause friction, which increases their size, and creates more heat, thus reducing the service life of the oil. To reduce this effect, chemical additives are added to the motor oil. These chemicals are designed to bond to the metal surfaces, filling in the abrasions, and creating a smooth surface for the metal parts to slide against. However, the additives used in most oil isn’t very effective in high-stress applications like fleet use, or performance / race driving. That’s why additives have become so popular.

What Are Chlorinated Paraffin Additives?

A common component of many additives is chlorinated paraffin. These chlorinated hydrocarbons are created by adding chlorine to a paraffin obtained through petroleum distillation, which results in hydrochloric acid. Once the acid is removed, stabilizers are added, and the product can be used as a friction reducer in an additive.

As the oil heats up, the chlorine reacts with the metal, creating a metal chloride film on the surface. This obviously covers those ‘ridges and valleys’, reducing friction between the moving parts. But once the chlorine has bonded to the metal, the hydrocarbons turn into sludge, and the excess chlorine can react with trace soluble metals in the oil, creating hydrochloric acid once again. This chlorinated paraffin depletes the alkaline in the oil, causing the oil to break down much faster than it should. Chlorine also eats away at rubber, neoprene and cork, which are the main components of engine seals.

Besides reducing the service life of your motor oil, and cracking or hardening the rear main seal, valve stem seals, and other critical engine seals, that hydrochloric acid can damage ferrous metals and aluminum alloys, turning them an ugly yellow color. Chlorinated paraffins don’t dissolve in water either, turning the used motor containing them into hazardous waste. All in all, chlorinated paraffin should be avoided at all costs.

Although chlorinated paraffin additives do more harm to an engine than good, there are additives on the market that can reduce friction without using chlorinated paraffin at all. CleanBoost® EMT™ for example, uses stabilizing antioxidants and unique metal deactivators to create a synergistic extreme pressure composition without altering the chemical makeup of the oil. This is the winning formula used by many NHRA Top Alcohol race teams to protect their very expensive engines and critical gear components. As the oil carries the additive through the motor / gears, a covalent bond is formed with the metal. The friction-reducing film that results… is bonded to, by penetrating the metal 2 to 4 microns deep. By contrast, the film created by chlorinated paraffin additives, merely sit on the surface.

Products like CleanBoost® EMT™ (Engine Metal Treatment) have been found to reduce friction and extend engine life, without creating acidic / corrosive by-products. And that allows you to protect your engine, without harming it in the longrun. Aka: a win-win situation.

"Americans have never really taken to diesel powered cars, but diesel powered trucks have long been favored for their dependability and longevity... but do you really need a diesel powered truck? And if yes, then how will you deal with the 2 main reasons why they literally die because of very expensive repair bills." Several years ago, Barack Obama ...